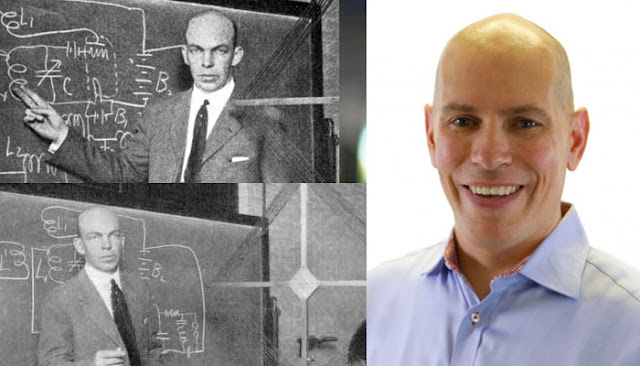 Look at the man on the left, and then on the right. Is that a crazy resemblance or what? I'm guessing they're not related, but they do have something in common. The man on the left, Edwin H. Armstrong (1890-1954), did more to advance radio technology than anyone - even to this day. He figured out how the radio tube worked and then how to amplify and regenerate the signal, later cleaning it up to concert quality with his discovery of FM (frequency modulation). Armstrong's impact cannot be understated. He is considered the father of modern radio, and it was radio that gave life to the electronics industry.

The man on the right, Jaime Fink, is co-founder of Silicon Valley based Mimosa Networks. He's part of a new breed of innovators in various communities that are taking wireless from art to science, and they're going to prove that wireless is limitless. Even Google and Facebook are pushing wireless development, literally hiring rocket scientists in a bid to deliver Internet service from the stratosphere. And closer to earth, advances like "beamforming", "GPS synch" and TDD (time-division duplexing) are already enabling a multitude of radios to play in concert with each other, sending and receiving on the very same frequencies. It won't be long before more wireless spectrum is available, even in dense urban areas.

"Wireless is limitless, and so we should stop trafficking in statements like, "there's not enough spectrum" and "wireless can't handle the bandwidth."
_______________


The fact is, we're at a New Frontier in wireless, and in this phase we'll see that the sky's the limit. But this is by no means a revolutionary thought. A century ago, Nikola Tesla envisioned that wireless would deliver not only communications to everyone's home, but also electrical power. He didn't see limitations at all, and I'm with him.

The destiny of wireless is for all people and all things to talk to all other people and all other things - wherever they may be, in an endless ethereal mesh that plays like a cosmic symphony where there is no shortage of frequencies or capacity. In its infancy, wireless was a medium to transmit a signal from one person to another who had special receiving gear. Then it learned to "broadcast" so that one transmitter could talk to millions of households - first with radio, and then with television. People carried transistor radios like we carry iPhones, and of course we had radios in cars and all sorts of radio controlled devices. In today's parlance that might have been called the "Wireless of Things." As for the "Internet of Things," well there couldn't be one without wireless technology, and some day phone poles and wires will be a thing of the past. Wires are for the birds anyway.

Stay tuned for my follow up, in which I'll tell you how a new breed of innovators is taking wireless to new heights, moving it from art to an extremely precise science, and challenging all our assumptions.
Posted by Unknown at 4:55:00 PM No comments:

Mimosa Channels Henry Ford with the First Licensed Backhaul Radio for Everyone - The B11. 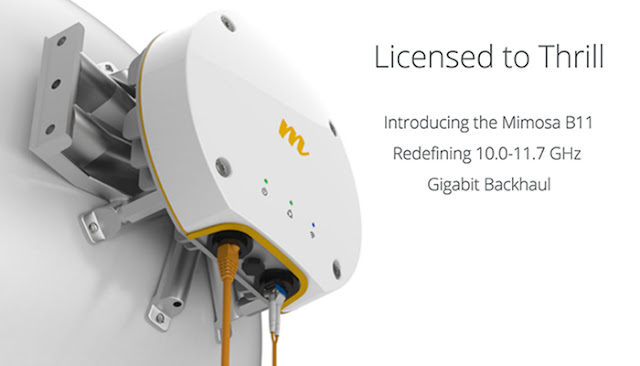 It's vintage American folklore how in the early days of the automobile there were tons of holdouts who still favored horses and saw cars as a fad. Then Henry Ford decided to make a car so affordable that any of his workers might own one, and that insanely bold leap changed everything. And what was once considered a toy for the rich became a mainstay of our culture.

Now Mimosa Networks is doing to licensed microwave (a.k.a. "licensed wireless backhaul") what Henry Ford did for the automobile. Likewise they'll be buried with orders from enterprise IT managers who, like early car skeptics, have never really warmed up to licensed microwave (okay... "wireless"). Now they can finally see what they've been missing. Incomparable performance, minuscule latency, higher bandwidths and no interference - a rock solid wireless connection second to none, and which is the true "carrier-class" standard that major carriers rely on worldwide. And what's crazy is that in a universe of licensed radios selling north of $12,000 to $15,000, Mimosa's is priced at under $4,000 (link price, both ends included).


"Mimosa is doing to licensed backhaul what Henry Ford did for the automobile."

No offense to Mimosa, but their pricing reminds me of my most painful dental visit. I'm in the chair getting (qty. 1) root canal and crown for $1,600 when the dentist says into my mouth, "When do you think the Internet will finally be free?" I practically spit the gauze out and asked him when he thought root canals might be free. I mean, where am I supposed to get his $1,600 if I'm giving out free bandwidth, and why should we have free Internet and not free dental care or free textbooks in college - or free (clean) water? Yet I never thought I'd see a licensed wireless link for $4,000, so I guess my dentist's vision (and my night terrors) might not be far off.

Weather extremes are overwhelming our systems. Storms and floods "never before seen," are happening in places never before imagined. Three years ago it was Hurricane Sandy that knocked out a huge swath of Manhattan and New Jersey. Now parts of South Carolina are reeling from what has been called a "1,000-year flood."

When extreme weather hits, it often takes with it aging infrastructure, collapsing roads, bridges and dams. This is a new dynamic in our lifetime, one that means girding up for rough seas - like we may have expected once in a generation, only now epic weather events are becoming commonplace. If our buildings and public ways are to be battered like ships on the ocean, businesses will need to become more seaworthy. That means building resiliency to minimize setbacks and bounce back to normal operation.

I Tell You, Wireless Backhaul Gets No Respect 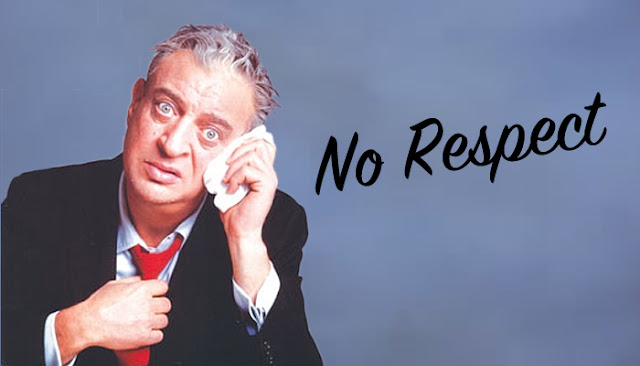 One of my first purchase orders came in 1988 for a link between Mass General Hospital and Harvard Medical School. I was delivering the world's first point-to-point wireless solution for Ethernet, and though it was my design, I knew very little about microwave. After the install, I sweat bullets every time a thunderstorm rolled through, waiting for a 2 a.m. phone call to say that my link brought the hospital's network down. Instead of celebrating a sale to Boston's most preeminent institutions, I was filled with anxiety.

Want to know what happened? Nothing. The link didn't fail once in the eight-plus years it was in service - not from rain or snow, wind or solar flares, not from the recession of 1990, cows farting or the collapse of Communism. And since then, I can tell you that the technology has only gotten better.

After that job we got some good publicity and lots of phone calls. Unfortunately most of them started like this, "Our consultant says that microwave goes down in rain... I understand that snow effects the signal... I hear that exposure to RF energy may be hazardous to our employees... I read somewhere that all the frequencies are taken up," etc., etc., etc. Okay, so I learned that the phone company - who was buying microwave by the truckload, was scaring the bejesus out of anyone else who might want it. I trusted that time would shake out all these misperceptions... 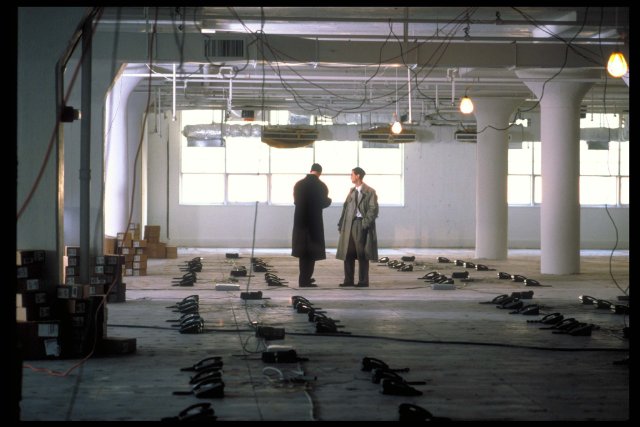 I go way back in the point-to-point wireless (microwave) business, having developed the first wireless Internet technology, followed by a string of other firsts and thousands of customer applications. Now given what I've seen, I need to say something about pricing to IT buyers in the enterprise community.

"Resist the urge to bargain shop for wireless backhaul. These days you can buy a PTP link for a song, but though the song seems appealing, it will make your ears bleed."

There are things in life that you can economize on, and others that you wouldn't think that way about. For instance, my son is a lacrosse goalie and when it comes to his helmet and pads, I'm not interested in "a great deal" on protection. I'm looking for the best they've got, and if it's more expensive - within reason, then I'm not ashamed to say that I gain a little confidence in that. And what about finding a surgeon? I've never heard anyone brag that they've found the cheapest one. What you want is a surgeon who's performed the same operation (over and over) on professional athletes and U.S. Senators.

A corporate data backbone is a main artery of your business, its lifeblood. It's something where you want to know you've got the best of everything - best radios, best installers, best support. Nothing but the best, baby!

Averting a Titanic IT Outage from Underground Cable Destruction

You’re the captain of your corporate IT ship. You’ve thought it all out - your routes, requirements and resources, and you prepared for the worse by spreading your network out to different carriers. You even have different fiber routes so that if one fails you have the other. But are you really protected?
When your carrier tells you that they’ve got back ups to back ups and they’re (statistically) never going down, can you believe it? From what I’ve seen, I wouldn’t. Carrier outages happen more than we think, and while they’re hardly publicized, call some of your IT colleagues and ask if they ever lost a connection to their carrier or Internet provider.
I figure that Bloomberg must have the best IT safeguards anywhere, but their network crashed anyway. We don’t know what caused it, but no doubt those folks stayed up endless nights working to prevent such a disaster. But it still happened, and I wonder what stone was left unturned that might have mitigated the damage.
In a similar vein, I wonder how “mixed media backup” dropped from the telecom vernacular. It was a popular phrase in the 90's (pre-Google), and what it meant was that - as a policy decision, whatever terrestrial lines you had were backed up over the air (using point-to-point microwave). What makes more sense than that? Yet it’s far from common practice these days, even as IT managers lose sleep thinking of ways to plug network vulnerabilities.

Email ThisBlogThis!Share to TwitterShare to FacebookShare to Pinterest
Labels: #carrieroutages, #internetoutages, #mixedmediabackup, #pointtopointmicrowave, #wirelessbackhaul, #wirelessbackup
Older Posts Home
Subscribe to: Posts (Atom)
ANSWERS YOU CAN TRUST
Hearing conflicting information about wireless backhaul? Trust this straightforward, insightful blog by the Father of Wireless Ethernet, David S. Theodore.
"David has a creative mind and a unique perspective that sees with remarkable clarity, the possibilities that others overlook."
Amory Houghton Jr., Past CEO of Corning, Inc. I'm a wireless innovator, writer and tech evangelist with a solid list of industry firsts, followed by countless wireless backhaul installations - mainly for enterprise users.
I'm available for content marketing, business development, writing and speaking - and I partner with enterprise IT managers to implement cost-saving, state of the art wireless solutions (without the reseller markup).
My Experience... I founded Microwave Bypass, developing the world's first wireless Ethernet solution (802.3), followed by other major firsts and leading to technology transfers with Motorola. Later I continued as a systems integrator, working for world leading institutions and cable operators, and designing a 720-mile ultra low latency network for trading between Chicago and New York.
I'm interested in all sorts of projects, so please don't hesitate to let me know if I can help you!